India, the cradle of civilization.. India, the largest democracy in the world.. India, the epitome of tolerance and religious freedom. Do we ever look beyond the glossy 'India Shining' advertisements and feel beyond the 'feel-good' factor?

Do we stop and take notice of the problems facing our OWN brothers in other parts of the country?? Do we notice the pain our OWN security agencies put our OWN people through?? There's a lot happening in Kashmir that we are not aware of..

Right now whats happening is NOT abt Kashmir being a part of India or Pakistan or being Independent.. It is NOT about bashing security forces like the human rights people do.. Its NOT about what separatists or organizations from ACROSS the border do to instigate and infuriate the forces.. Its NOT about how the Kashmiri pandits were treated a decade ago.. All these issues are complex and need deeper insights and the political will to resolve them..

What it IS about though is the plight of INNOCENT kids.. 12 teenagers have died in the past month falling to police bullets/ tear gas shells and the like.. Its about what THEY have started thinking of Indians as and what THEY will grow up to be.. Its about how future generations will perceive US if we let this continue.. 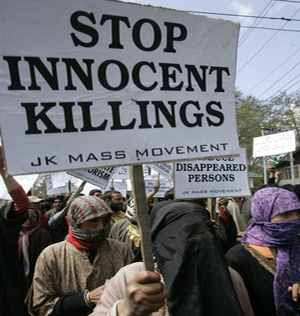 When Jessica Lal was murdered and her killer set free, there was a huge public outburst.. when Ruchika Girhotra's molester was let loose same thing happened.. but when 15 INNOCENT people are killed by the bullets of those who are supposed to maintain peace everybody is busy taking sides.. Security forces AND Kashmiri people are BOTH citizens of India.. the attacks on security forces are to be condemned but they did not lead to the death of TEENAGERS and KIDS!!

We totally justify the use of force.. but only against TERRORISTS and not against the Innocent civilians who are exercising their constitutional right in protesting against the killing of another innocent protester.. whether they want to stay with India or not, they are our own people and deserve to be dealt with dignity!

If we still don't stand up for our own people's rights, one day WE will be at the receiving end and we'll have no one but OURSELVES to blame for it.. We OWE this to Humanity and our OWN idea of Our nation..

Like the famous Swades dialogue, 'Koi desh mahan nahi hota, usse mahan BANANA padta hai!" We need to recognize what's happening in our own backyard and try to help those who are suffering.. Hoping that we can at least start a dialogue and start building bridges.. Please take some time to sign the petition and forward it to your contacts.. http://www.petitiononline.com/AnIndian/petition.html