From Assam to Azad Maidan

Its been a week now that a rally to protest the killing of ethnic minorities in Assam and Myanmar went out of hand and held Mumbai to ransom on Saturday afternoon. 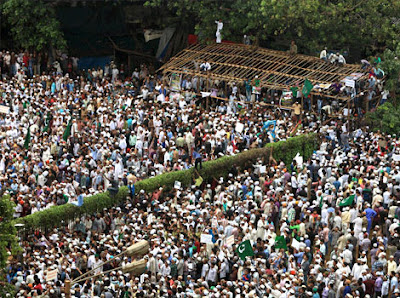 There is nothing wrong with organizing a peaceful protest against alleged outrages of a humanitarian nature. But, what is defintiely NOT RIGHT is the arson and stone pelting and molestation of women that happened under the garb of this protest!

Arup Patnaik, commissioner of police, Mumbai said, “Around 2.30 pm, some men pulled out provocative pictures of people being killed in Assam”. The protesters suddenly turned unruly and set afire vehicles, damaged buses and pelted stones. Police opened fire in the air and resorted to lathi-charge to disperse the mob, said a policeman deployed at the Azad Maidan.

As per official reports, Maulana Gulam Abdul Kadri has been named the main Culprit for Mumbai menace on 11/8 Mumbai riots, whose inflammatory speech changed the situation so virulent. During his speech, a mob became agitated and came out of the Azad Maidan with banners, flags and bamboos in their hands and raised slogans. They were joined by a group of 1,000 young men who came out of the Chhatrapati Shivaji Terminus railway station. They raised slogans, used abusive language, and soon turned violent despite the police’s appeals for peace, the report stated.

In the 45-minute violence, two persons died, over 65 were injured — 56 of them policemen — and vehicles were torched. Three media OB vans, three police vehicles, two motor -cycles and a public transport bus were set on fire. Forty BEST (civic) buses, two four-wheelers and five two-wheelers were damaged in stone pelting. 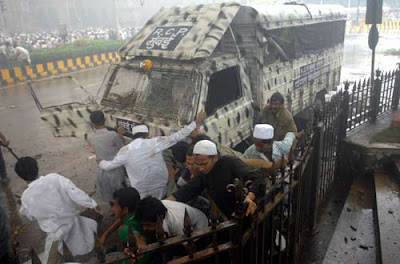 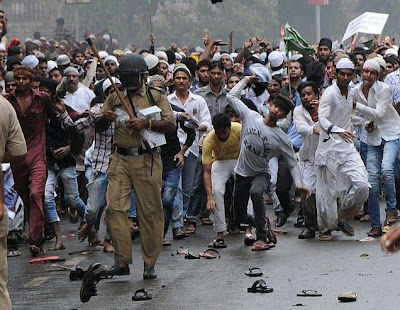 The camera footage also shows the mob molested women, including cops. Three police weapons - two rifles and a pistol - were stolen at the time of the clashes. The mob stole two self-loading rifles and a pistol from the police along with 160 rounds of ammunition. While the two SLRs were found in damaged condition, the pistol is yet to be recovered.

Meanwhile, the Mumbai Press Club, quoting eyewitnesses, said the trouble started when a cleric criticised the media for not adequately highlighting "atrocities" in Assam and Myanmar. This angered some in the crowd who turned against TV crews and photographers present in and around Azad Maidan.

The crime branch, which is investigating the incident, has recovered a country-made firearm (katta) from the spot. Where did all these weapons come from?? How was the police caught so unawares??? The same police, that sometimes goes overboard in controlling peaceful crowds couldn't really handle an armed crowd when needed!

Perhaps, the most shameful act was the DESECRATION of the Amar Jawan Memorial dedicated to the martyrs at CST station! 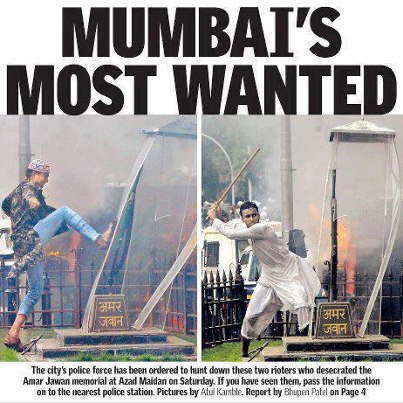 What were these protests against though?? Why would people who are fasting for the Holy month of Ramzan suddenly turn out on the streets armed with swords and knives and thrones and in one instance even a hand-made revolver!

You would be surprised to know, that the protest wasn't against any injustice to Muslims in India or the desecration or insult of Islam in any way.. it was staged against the alleged killings and riots against Rohingya Muslims in Myanmar (who are the illegal Muslim populations in Myanmar migrated from Bangladesh) and the Bangladeshi Muslims in Kokrajhar, Assam!

One might wonder, what the protesters in Mumbai had to do with these groups??? The answer is manifold and has deep layers to it:

In this connection the riot situations have already taken place in Ranchi (Jharkhand) and Bareilly (Uttar Pradesh)! Roused by the same sentiment, a frenzied mob attacked vehicles, shops and public life in Albert Ekka Chowk in Ranchi on 10th August, just a day before the Mumbai riots. In Bareilly the clash happened over a Janmashtami  procession on 11th August where according to the eye-witnesses, speakers started provocation with the reference of Myanmar and Assam incidents. 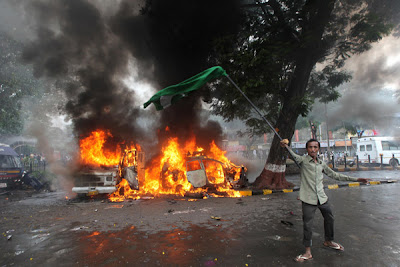 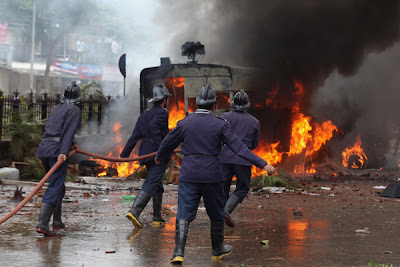 Mr. Patnaik was on the spot within minutes of the situation turning violent. He addressed the crowd from the dais of the rally and appealed for calm, reminding people of the incidents during the 1992 Babri Masjid demolition. The police chief told them he did not want any repetition of those ghastly memories, thus calming down the crowds.

Asked why force was not used earlier to control the rioters, he said the police showed utmost restraint. “Should I have fired, I don’t know. Would you have wanted to see 500 bodies? I was more afraid of the situation when 500 jawans were ready to fire, with hands on the triggers. I had to control them first, then turn to the protesters,”

Perhaps, the explanation he gives is right.. Teesta Setalvad, from an NGO called  Citizens for Justice and Peace also congratulated the Police Commissioner, for his mature handling of a potentially explosive situation on Saturday did ensure that matters were brought under control.

Muslim leaders apologized to the Commissioner on Monday and expressed their desire to help the injured police personnel. “All the Ulema had come to apologize. That is because they know that the police acted with equity and fair play,” he said.

In an effort to help the police, CJP has brought to their notice certain “morphed” images of “atrocities” on Muslims in Assam and Myanmar which were allegedly used to garner public support for the August 11 protest which turned riotous at the city’s Azad Maidan.

In the letter to Mr. Patnaik, the CJP has annexed a copy of the blog written by a Pakistani writer Faraz Ahmed on July 19, 2012, with the heading ‘Social media is lying to you about Burma’s Muslim cleansing'. I am attaching the link on the PAKISTANI DEFENCE Forum to show what is really happening!!! 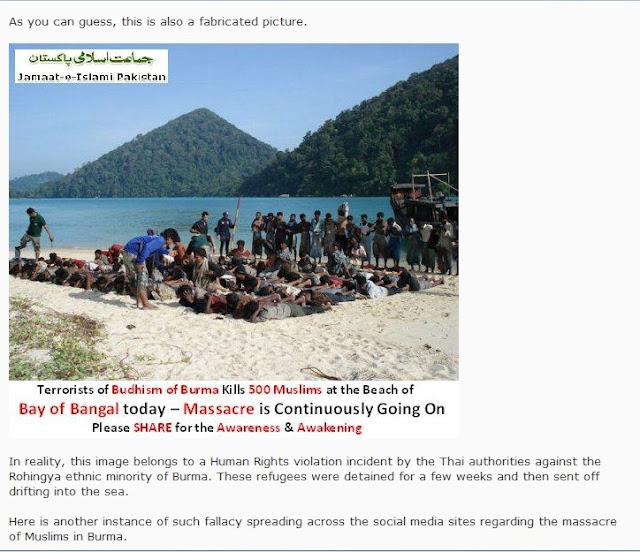 This is how Muslims in Kashmir were instigated to protest against Indian forces and the same strategy is taking shape again in different parts of India!! All the evidence points to a planned campaign, though its unclear who exactly is orchestrating it.

What is even more intriguing is that there are bloody riots in Assam, which in turn triggers violence at a rally in Mumbai, followed by attacks on students in Pune and stabbing in Mysore. The chain of events triggers a panicked stampede in Bangalore?

There seems to be a systematic campaign to create fear, using social media, SMSes, and regional media to spread rumors of attacks. It seems like a planned Jihad is underway with some covert organizations probably with foreign support seeking to destabilize the current harmony.

There are rumors of a planned “reprisal” from the Muslim community, as reported in the Indian Express: “Some employees referred to direct threats of violence after Ramzan being made to them, others referred to an alleged video of a brutal attack in Assam being circulated among Muslims for which reprisals are being planned, while still others referred to alleged warnings from the police itself.”

Is this the making of a NEW conflict where Muslims from the rest of the country are being pitted against the people from NORTH-EASTERN states????

The police have finally decided to charge the arrested persons with murder and 23 people have been booked on the basis of the video and camera footage. The man who snatched a police rifle has also been arrested and is a 23 year old salesman at an electronic store. We wonder what direction these people want to give to their lives.. if there was a genuine grievance of ill treatment of Indian Muslims within India, the protest could have been justified.. but protesting and damaging national property and resorting to violence on an issue happening across the border can not be condoned!

The question that the protesters need to ask themselves is whether it is correct to hold your OWN Govt. and the PUBLIC at ransom based on half-baked HALF-TRUTHS about events happening in some OTHER country which in the first place, are a result of ILLEGAL immigration by the so called victims!! Unless these youth themselves understand the consequences of their actions, the police would have little success in limiting such protests in the future..

Hoping that Peace and Good judgement prevail
Jai Hind!
Posted by Dr. Vineet Aggarwal at 4:34 AM

I'm at a loss to understand this whole thing... The Myanmar massacre is happening even though social media is full of false pictures... May be we dont see true pictures becoz Myanmar has been a very reclusive country which is yet to open up
to d world... They didnt allow foreign journalists recently... As far as Mumbai & North East is concerned, I'm sure there's a masterplan being formulated & I suspect everybody behind it like foreign agencies, extremists from of every hue & colour-green as well as saffron... But, at the same time I think it's very naive to think of Bangladeshi illegal migrants doing the same... They come from a very poor country to a relatively less poor country mainly to feed themselves... It'll be very foolish & in fact impossible for them to do this masterminding stuff..... AND ABOVE ALL, I'VE STOPPED BELIEVING MEDIA...

@Shoaib Abrar I know what you mean.. The media has in recent times completely lost its credibility with its selective promotion of news stories.. As far as the Myanmar situation is concerned, m not too sure what exactly is the situation there but the use of doctored pictures makes me blv that there's a lot of exaggeration happening!

And about the Bangladeshi illegals, you would be surprised to know how much clout their vote bank has! They're certainly involved in a lot of illegal activities and quite well organized!

Yeah.. The doctored pictures r not allowing me to give a solid opinion... I came across an article some time back exposing these doctored pics & I was shocked! I'm sure the happenings in Assam & Mumbai have all d essential ingredients to foment communal tensions... I hope people dont fall prey to such tactics..

Totally bro.. they form a big vote bank to appease which the so called secular parties let these illegal immigrants stay on in our country!

‎Hemant Das yeah bro.. its time we stop pushing them under the carpet and start talking about these topics in open..

Decades of discrimination have left the Rohingya stateless, and they are viewed by the United Nations as one of the world’s most persecuted minorities

Bilkul uthani chahiye.. But I don't think we should support the spread of doctored pictures to put our point across.. It just plays with the emotions of simple minded people and makes them do anti social activities..

No concrete action or solution..But lame excuse surfaces... Pakistans hand in it they say..

@Navin thts always the easiest way out for our politicians!!

Instead of cleanin up the mess they hv created, they choose to blame other countries for their own blunders!

@man on mission.... dear sir...so what do you think, people will wake up for a sanatan rashtra or they will dive deep into the ocean of sorrows and death(a dream of bilderbergs urf illuminati)