We call India a secular country but is the law really equal for all?

Even after 69 years of Independence, a Uniform Civil Code remains a dream and religious minorities continue to be governed by their own laws especially in relation to marriages, divorce and entitlement. The state is supposed to stay away from religious affairs but in this post I want to highlight an Act that gives clear permission to the state governments for meddling in the affairs of institutions belonging to the majority religion.

Did you know, out of all the varied faiths existing in the country, ONLY Hindu religious establishments have to share their earnings with the state? This because of the Hindu Religious & Charitable Endowment Act 1951 under which a State govt. gets the right to audit temple funds, appoint archaks (priests), set up a committee to monitor temple affairs as well as appoint an Endowment Commissioner to look after the donations given to the temples.

Hindu temples have been the centers of local communities since historical times. The importance of pilgrimage to important temples like the Chaar-Dhaam Yatra or the 12 Jyotirling Darshan used to be religiously followed by many devout Hindus. The village temple would be the location of all public gatherings where entire community would join to celebrate festivals, organize cultural events and listen to sermons from the priests. Of course now times have changed but I am talking about when most Hindus did believe in god and considered going to the temple their religious duty. Even today we find vestiges of it in gatherings at the time of festivals at least in the highly popular temples like Vaihsno Devi in Jammu, Tirupati Balaji in Andhra Pradesh or Siddhivinayak temple in Mumbai.

Anyone who has been to a temple knows that a lot of devotees give donation to the temple especially since Daan or offering is considered a religious duty. Some may donate ten rupees while others may give jewelry worth lakhs. The same trend was prevalent in ancient times when the temples saw donations from kings, traders, wealthy merchants, visiting dignitaries etc. and gradually amassed a lot of wealth. Much of it would be utilized in the maintenance of the temple and organization of religious functions or Vedic pathshalas. Of course the immense wealth accumulated by these religious institutions did not escape notice of invaders from the West and the plundering of Hindu temples by Turks, Afghans, Mughals and their like is no secret!

The British were no different and they saw an opportunity to use the vast resources of multiple Hindu temples for their personal benefit! In 1923, the Madras Hindu Religious Endowments Act was created by the local Legislature which was later repealed and a new act passed in 1926. Since then, it was amended at least ten times giving the board more and more power over temple affairs. The efforts didn’t stop with India’s independence and the Madras Government passed a new Religious Act known as the Hindu Religious and Charitable Endowments Act, 1951 which provided similar powers to the state government.

What is surprising is that even after the Supreme Court struck down the “illegal” provisions of this Act in 1954 related to the appointment of executive officers in temples, these were brought back by the state assembly by legislating the Tamil Nadu Hindu Religious and Charitable Endowment Act in 1959!

Clearly there is something sinister in this juggling of law and by the estimates of Temple Worshippers Society
[http://www.templeworshippers.in/govcontrol.html], assets worth millions of dollars have been appropriated by state governments in Tamil Nadu, Andhra Pradesh and Puducherry citing the above act. In fact, the website of Tamil Nadu Hindu Religious & Charitable Endowments Department clearly mentions - The management and control of the temples and the administration of their endowments is one of the primary responsibilities of the State [http://www.tnhrce.org/]. 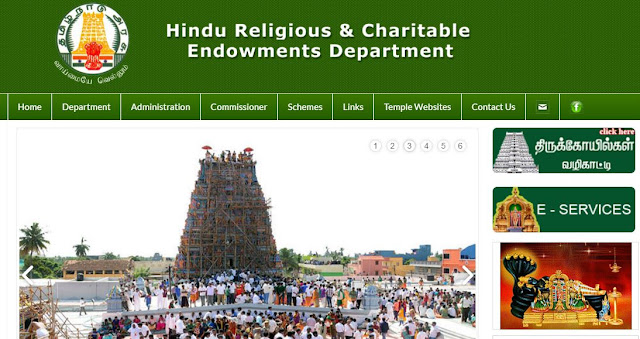 Ostensibly, this act aims to ensure proper management of religious bodies but clearly its scope is limited to these institutions of only one religion making it unconstitutional. No other religious affiliation has to follow this act and they are free to use their assets the way they want be it setting up their own religious schools or even for conversions since no one is questioning where the booty goes!

A Supreme Court Bench had ruled that Article 30 of the Constitution did not confer any special privileges on minorities - it is not a right but a protection ensuring that minorities get the same rights as the majority community. But here we have a law that while giving freedom to some religious establishments, penalizes others because they belong to the majority community!

There are many who silently grumble about such unfairness but never speak out for the fear of getting labeled as a Bhakt or for the sake of appearing politically correct. But all such people should ask themselves if their silence is helping India in any way?

SECULARISM implies that ALL religions should be considered equal. Article 15 of the constitution prohibits discrimination on the basis of religion and provides equal status to all religions without any preference shown by the state yet the HR & CE Act of 1951 clearly violates this basic tenet. Either all religious establishments irrespective of majority or minority denomination be brought under its purview or all such institutions be made independent of government control.

If you agree with the inherent unfairness of this particular act please sign the petition below to build public opinion against such lopsided rules in our country and help create a more egalitarian and a TRULY SECULAR Society - http://chn.ge/1WVYpsS 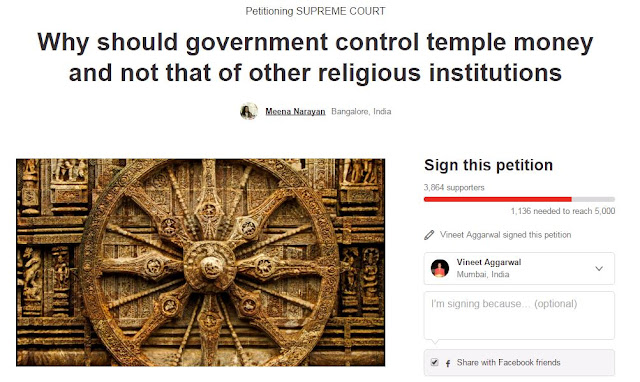 For a more detailed analysis by someone more worthy than me please check this article - http://indiafacts.org/temples-and-the-state-in-the-indian-tradition-part-8/.