ARUNACHAL MLA'S SON BEATEN TO DEATH IN DELHI - the headline screamed.. In yet another incidence of racism against north-East students, a young first year college student was beaten to death by shopkeepers in Delhi after an altercation sparked by their taunts on his hairstyle!!

What is happening to our country?? Are we really defined by this bunch of hooligans who hurl racist remarks on people who look different from us and molest girls in public?? Where is the thinking Indian hiding?? Don't we realize the dangers of such segmentation? Already our country has been divided into three pieces due to the never ending religious fights.. do we want to break it up again based on color and language?

Nido Tania, the unfortunate lad who lost his life today happens to be the son of an MLA from Arunachal hence the media highlight. How about the racism that an average person from the North-East has to deal with in his own country just because he looks different and has a better sense of style than the boorish thugs in Delhi's streets!

When he complained, he was abused and in anger he broke the shelf of the shop. He was then beaten up and handed to the police. After he paid an amount of 10,000 rupees to the police he was released and left back at the shop. There he was beaten up again mercilessly till he managed to run away to a friend's house. In the morning, he was no more... 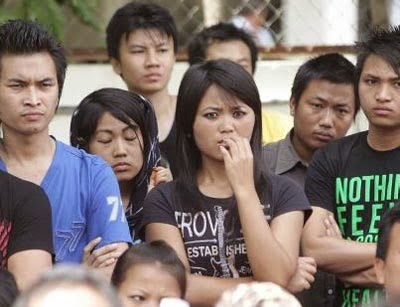 Nido Tania, the unfortunate victim of racism in his own country! 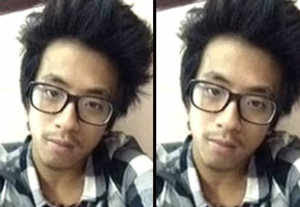 It's a shame that even in the 21st century we can't accept people different from us as our own. Earlier it was the Muslim youth who had targeted North-East students in Bangalore and Pune as a reaction to the Rohingya killings in Maynamar and now this attack on an innocent student in Delhi!

On one hand we fight China stating Arunachal as our own state and on the other we can't even protect people from that state in our own capital city!! What a shame!! Our ancients never differentiated on the basis of color and features. The Kurma Puran states - In Bharatvarsh, men and women display different colors, worship various gods and perform many different duties.

Shri Krishna, the epitome of godhead was dark like a monsoon cloud and so was Shri Rama who forms the spearhead of Hindu Nationalist parties. King Dashrath's three queens were from Afghanistan, U.P. and Maharashtra while Arjun had married Subhadra from Gujarat and Chitrangada, the daughter of the king of Manipura (Orissa). There was no discrimination in their minds then why are we so narrow-minded??

Our scriptures record a plural society since time immemorial proving that we have always been a pot-pourri of different colors, cultures and appearances. The races differ in appearance but NOT in genetic parameters. Our present diversity evolved as waves of  initial settlers moved both towards North as well as South of the country, all the time Intermixing and Migrating to OTHER countries.

Over the eons, Dravidian lineages have mixed with Indo-Europeans, Austro-Asiatics have mingled with Dravidians, and bridge populations in central India are blends of Dravidian, Indo-European and Tibeto-Burman groups. Read this post to know how closely we all are linked irrespective of our external features: Genetics of the Wandering Indian. 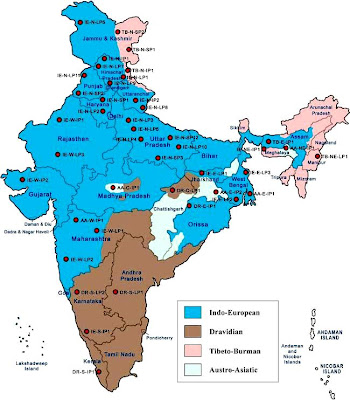 Macrohaplogroup M, a cluster of Proto-Asian maternal lineages, represents more than 60% of Indian MtDNA. Now, observe the similarities for this Haplogroup found in different populations of the country:

The study has shown some Hindu caste groups to be genetically closer to Muslims in the same geographical region THAN to their own caste cousins elsewhere in India showing that our current RELIGIOUS differences are merely superficial and people in a specific region are more or less the same. 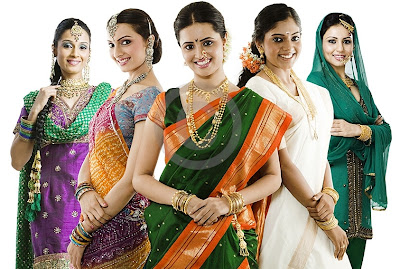 The Genetic Map thus obtained, shows a remarkable amount of heterogeneity within different Indian groups while bringing out even more remarkable RELATEDNESS between groups till now considered to be at the opposite ends of the spectrum. The differences in our appearance are broadly a result of the ADAPTATION to local weather conditions over thousands of years.

The Natural Selection Hypothesis suggests that lighter skin color evolved to optimize Vitamin D production in extreme northern and southern latitudes. Gradually, as we started moving out of Africa, some groups migrated and settled into cooler climates of Asia and Europe, and the selectivity for Melanin production decreased and mutations appeared, making the skin tone lighter. North or South of 46 degrees latitude, the dark-skin could not produce enough Vitamin D while light-skin could hence it thrived!

Another example of such adaptation is the smaller extremities observed in the Mountain-dwelling races. This adaptation is summed up in Allen's Law of Genetics which states that the protruding parts of a warm-blooded animal's body (such as the tail, ears, and limbs), are SHORTER in animals of same species from colder regions.

In other words, people living in COOLER areas have smaller bodies and flatter features to conserve the precious body heat compared to those living in WARMER climates. The same is quite evident in the populations dwelling in our Himalayan states. 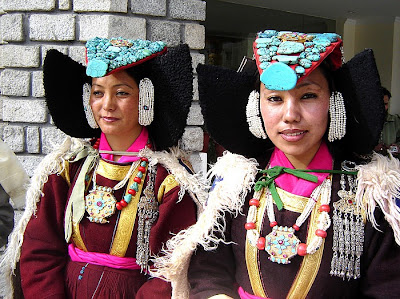 This doesn't make one race SUPERIOR to the other in any way except for the ability to SURVIVE in a particular environment!! All our apparent differences are Nature's GIFTS to ensure survival in the respective climates we are born in and do NOT in any way make us different from each other from inside. 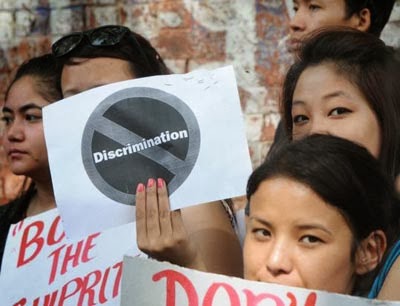 As long as this continues as harmless banter it is fine but the moment it starts hurting another person we should stop and think. Is having fun at someone's expense more important than another person's life?? Had those shopkeepers in Lajpat Nagar thought of this, perhaps a life could have been saved!!

I pray and wish that our countrymen move on from this parochial mindset and learn to accept everyone else as their own countrymen who we have to get along with isnpite our apparent differences. Ending this post with a prayer to the Motherland and a Hope for Peace..
Oh! Mother, Let me be blessed on the sacred shore of the Sea,
Where the World has gathered to pay reverence to Thee,
With outstretched hands we bow to Divinity,
With Supreme felicity Mother, We worship Thee..

No-one knows who invoked them all,
Who have gathered like currents of mighty rivers,
That dissolve themselves in the Divine Ocean,
Where Aryas-Dravids-Mongols-Pathans detach their Individuality.

Where our heart-strings play an endless tune of Omkar,
In search of the Supreme, we've penanced for ages,
And oblated our Ego, in the Holy fire,
Throwing away differences, We emerge into Universality.

Come Aryas, Non-Aryas; Hindus and Muslims,
Come Englishmen; Come Christians and Buddhists,
Purify your hearts, Hold hands of the Out-castes.
For the Coronation of our Mother, by this sacred shore of the Sea.