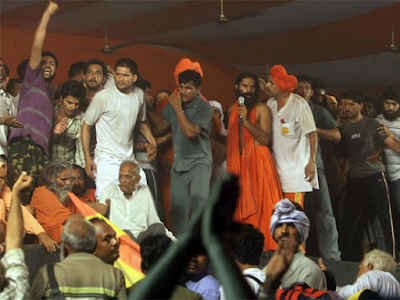 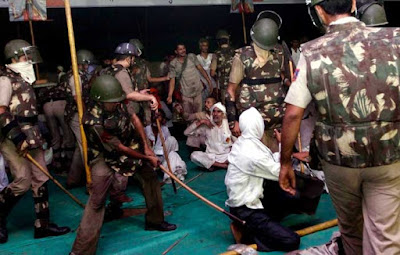 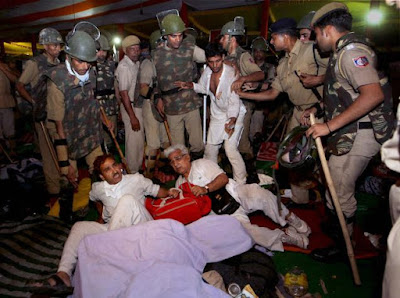 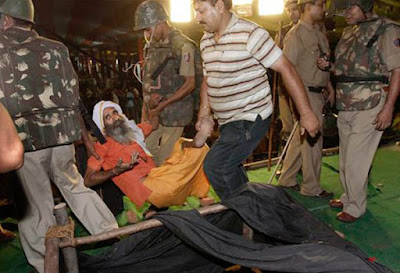 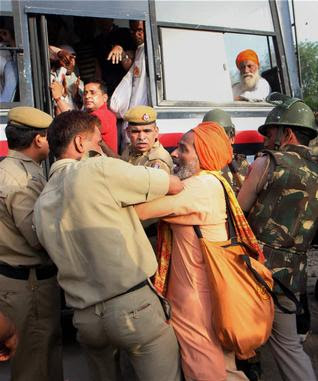 Email ThisBlogThis!Share to TwitterShare to FacebookShare to Pinterest
Labels: Assault on protesters in Delhi

Awesome bro...keep it up....unfortunately the party which won independence for india is no less than the imperalistic power which held it for more than century....really india is bending more & more towards dictatorship than real democracy........shame on present govts. At last i want to quote one saying of Mahatma Gandhi whose exact words i don't remember but it is lyk this, "India will become the super power of world, if its leader is as honest, as truthful & as just as Hazrat Umar(may ALLAH be pleased with him).(Hazrat Umar(RA) was one of great Islamic Caliphite)....thanks bro for remembering me in ur comment....ALLAH HAFIZ

Thanx for commenting buddy.. I wish our politicians develop a CONSCIENCE soon!!!

A politician with a conscience is so Utopian....

We have been talking about a revolution happening for the last 50 years....we missed the opportunities on making Patel the 1st prime minister, we missed beating the caste system out, we missed rebuilding infrastructu...re in J and K, as well as the North-East, we missed getting together as a nation and instead are more focussed on who can work in which state and how one can advance one's religio-political goals.... pessimistic as this may sound, not much will come out of this event as well, especially with a lameduck parliament and a spineless lokpal bill granting further immunity to politicians....

@Kamal Bhatia i agree wid all ur points.. thts y i posted dquestion for us.. WHAT R WE GONNA DO ABT IT NOW???

approach local politicians and use them to pressurize the upper levels...use the RTI more carefully, so it does not loose its teeth...as an individual, each one of us should follow and propagate what we want for our country- follow basic la...ws set up, dont cut corners, dont bribe....there are so many things that come as second nature in our country, for that to change, we need to change and convince those around us as well.... people here in the US take great care of their country, they havent done it overnight.....its taken several 100 years.....

I would have imagined that we would have had atleast one political party against the current lokpal bill, but I hear no other voice...for starters, maybe some like minded youth could garner a political forum together and have a voice.... vinnie, I dont have a problem with peaceful protests, but if every one starts protesting with strikes for things they want to get done, and demands they have [look at the frequent strikes happening], you have lost law and order already....

‎Kamal Bhatia thts d problem.. i dont SEE anyone coming forward to tk any initiative.. we had formed an organization in MBA college called FATE and thts wht this blog is abt.. but then everyone got into thr own jobs n moved to diff cities!! ppl r not even bothered enuff to comnt on a post wht more steps wud they tk ?

It's extremely unfortunate and i think all this happens because of the lack of accountability and wrt Kashmir, most of the people are ignorant and they dismiss it as collateral damage which is so unfortunate.

You jotted down your rage in this article. Many like you are having the same questions in their minds regarding this latest issue. If in a democratic country all citizens have the right to express feelings freely, then why this act of slaughtering own people and that too on those who were protesting non-violently?
It was a shameful act by UPA government and they should apologize publicly for this.

Well said bro, situations like this in our country are not new to anyone and still all of us are just keep watching and accepting. People like Anna hazare and Baba ramdev come forward to fight for common man but the question arises here is that whether common man wants to fight or not. But now I belive people should think deeply and come out such reactions or reactions whcih cause some reasonable outcome which will provide some secure future to them and to their children. Accident happend on 4th night was shameful event in our freedom history. If police are going to do this then how they are differ from britisher who did the same thing in Punjab. We should shown our respect and sympathy to people who suffered in that event. Sorry to say event that was bloddy shameful intentionally practice.

WE ALWAYS KNEW CHURCHILL AS THE ONE WHO HATED GANDHI AND INDIA. BUT HIS WORDS, WHILE SPEAKING AGAINST FREEDOM FOR INDIA ARE SO PROPHETIC...............

"Power will go to the hands of rascals ,rogues, freebooters; all Indian leaders will be of low caliber & men of straw. They will have sweet tongues & silly hearts. They will fight amongst themselves for power & India will be lost in political squabbles. A day would come when even air & water would be taxed in India."

We are incredible; we have worked very hard and we proved him right.....

None of the Leaders (per say) in our country have a Conscience, according to me.... Everybody takes up issues just to further their interests, just for more n more publicity....!!
What I dont understand is, why cant Indians hav a mind of the...ir own..??? Why do they fall prey to such pretending, so-called social protesters.. We should stand up for what we believe in..., not what any1 craving fr more social recognition pulls us into...

@Vandana well said sis!!
@Rachita i think d problem is tht none of US r actually concerned abt ANYTHING happening in d country... we r so apathetic to every problem arnd us..

@Vipin bhai sorry missed reading ur comment!! Ur absolutely rite.. we need to get together n raise our voice once again lk we did when we formed this community!!

The problem is that when Hindus protest peacefully, the cops are often given the orders to act heavy handed. But as seen in Azad Maidan some weeks back, they lacked any guts to restrain a highly organised mob of Muslims, waving Pakistani flags & shouting Jihadi slogans, who quickly began looting, arson, molesting, stone pelting etc and nothing was done to maintain order. This was a highly organised 'protest' with the help of the Centre UPA with the Muslims having their go ahead to rampage on the Mumbai streets.

Quite true! The cops and judiciary shud be impartial irrespective of the caste and religion of the protesters..