A 23 year old girl is brutally raped by 6 hooligans in a private bus she boarded with her friend from Select City Walk, one of the most posh malls of Delhi! Her male friend is stripped and beaten by an iron rod. The rod is shoved INSIDE the unfortunate girl and her intestines rupture! Both of them are stripped and thrown off the Mahipalpur Highway to die in the bitter cold!

Are you still able to breathe properly??


The Delhi Police have revealed in a report that a woman is raped every 18 hours or molested every 14 hours in the Capital. If that's not shocking enough, most of the attackers fall under the below 25 age bracket!!The latest rape statistics released by the National Crime Records Bureau (NCRB) has once again put Delhi on top of the shame table.

According to a Times Of India report, Delhi registered 568 cases of rape, compared to 218 in Mumbai in 2011 according to NCRB records. In the 2007-2011 period, Delhi topped the chart, followed by Mumbai, Bhopal, Pune and Jaipur.

The seething outrage over the case spilled on to the Rajpath on Saturday as a large number of youth, in different groups, descended to protest in front of the Rashtrapati Bhavan seeking justice for the victim.

Around 8 a.m. the youth started converging at India Gate demanding death penalty for the rapists. As the crowd swelled, it began moving up on Rajpath towards Rashtrapati Bhavan. Overshooting police anticipation, students and young professionals — who primarily relied on social media and SMS communication to muster support — began screaming their lungs out against what they described was utter complacency and lip service by the government and the police in the matter.

Delhi Women on streets protesting against the Rape Culture 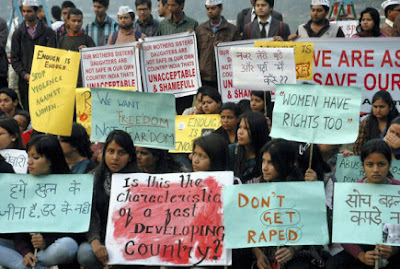 The police, however, blocked the path of the protesters with barricades and buses parked at the footsteps of Raisina Hill and as new groups kept merging with the protesting crowds, their FIRST FACE-OFF with the police happened around 11 a.m. To disperse them, the police trained a water-cannon on them and lobbed a volley of tear-gas shells. 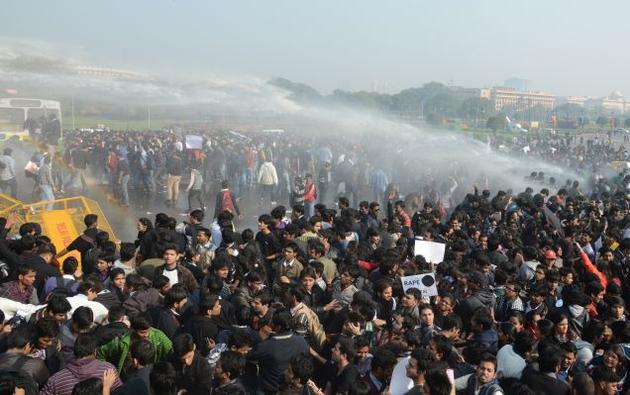 What followed was a brief spell of violence by some protesters who targeted police buses, accusing the police of unnecessarily using force on unarmed protesters who included girls and women. On at least six occasions, the police resorted to caning the young protesters, who hurled stones, shoes and water bottles at them in retaliation.

Around 5.30 p.m. when hassled senior police officers were busy negotiating with a group to defuse the prevailing situation and manage the leader-less crowd, the LATHI-WEILDING security personnel in riot-gears AGAIN CHARGED at the protesters driving them away. The aggressive response from Delhi Police, left 125 tear-gas shells lobbed and at least 35 protesters injured! 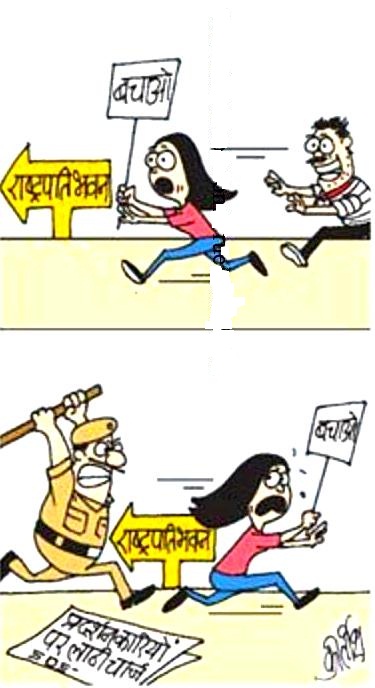 The protesters tried to reorganise at the nearby Vijay Chowk where they were attacked again, this time from all the directions!

Several of them sustained injuries but they decided to stay put with YOUNG GIRLS FORMING A CHAIN AROUND THEIR MALE COUNTERPARTS to stall the police advance. Hats off to the brave girls of Delhi! Also kudos to the men who came out in large numbers to support their female friends and brave Govt. high-handedness to reclaim their rights.

A defiant India reclaiming its rights 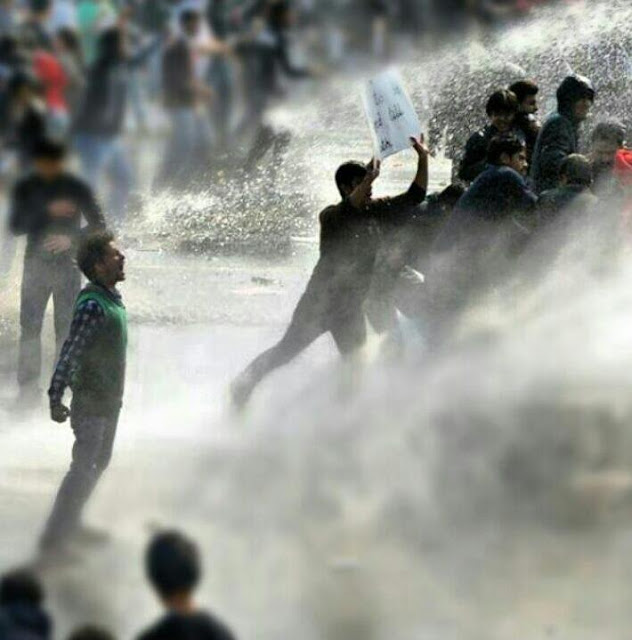 Leaders of the Aam Aadmi Party, including Gopal Rai, Manish Sisodia and Kumar Vishwas, who also participated along their supporters, addressed the crowd later in the evening. The day culminated in a meeting of one of the groups with Union Home Minister Sushil Kumar Shinde who assured them of fast-tracking the trial in the case and a “sea-change” in policing through implementation of long-term reforms.

This morning while Sheila Dikshit was condemning the force with which Delhi police acted yesterday, its lackeys were busy dragging protesters and pushing them into buses to take them away from India Gate!


The buses took away the protesters and dumped them at far-off places so that they would not be able to reach India Gate again! EIGHT METRO STATIONS ARE SHUT to prevent people from reaching the venue! Where the hell are our FUNDAMENTAL RIGHTS?? Where the hell is DEMOCRACY? 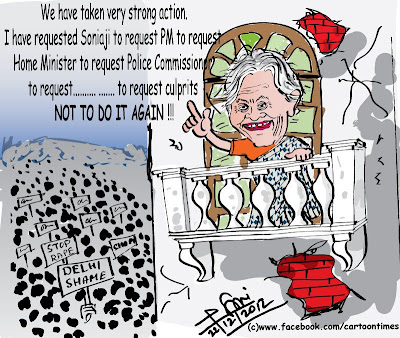 Later, Baba Ramdev was arrested and Arvind Kejriwal picked up from Hyderabad House where he was protesting. After clamping down Section 144 on the city today, the Govt. again resorted to lathicharge and water cannons.. The manhandling of girls, old ladies and even old men has left people dumbfounded! Many people including some constables got injured but this time public anger seems difficult to control.

These are the people who are supposed to protect us! 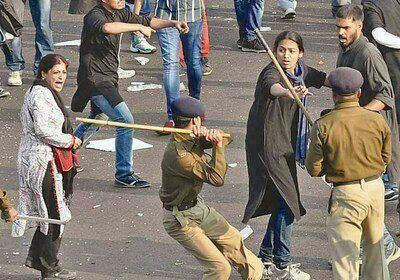 Shame on this manhandling by Delhi Police 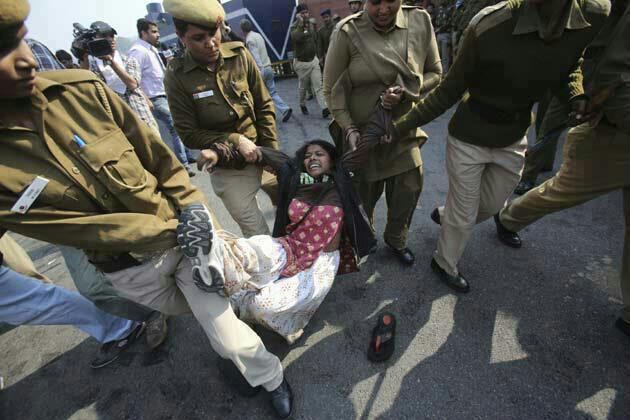 Shame on Delhi's Security Agencies which let such incidents keep repeating! Instead of hitting the protesters and turning them more violent, they should do THEIR JOBS better and grab hold of criminals and culprits! You don't need to be a woman to realize how unsafe Delhi and NCR has become for its citizens. And sadly, a similar trend is visible right from Assam to Tamil Nadu and Bihar to Mumbai!

Please start a peaceful protest in your city today. DO NOT get into violent mode and DO NOT destroy public property. Spread this for your Nation and participate to make INDIA a better place for all irrespective of religion/caste/gender/language! This time, let's not rest until we CHANGE our destiny. 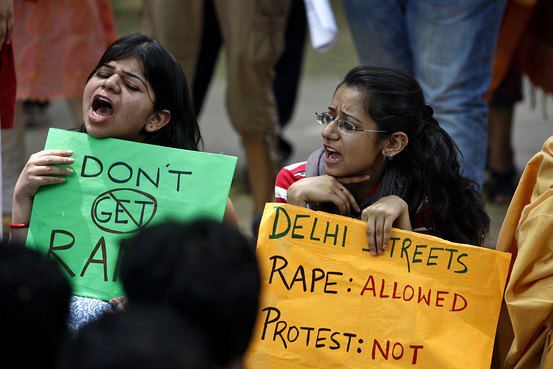 May the Force be with Us All!
Jai Hind!
Posted by Dr. Vineet Aggarwal at 9:46 AM

Email ThisBlogThis!Share to TwitterShare to FacebookShare to Pinterest
Labels: Delhi - the Rape Capital?

I was shocked yesterday by seeing the home minister of INDIA was sitting in sleepy and boring while Jayabachan reacting on the RAPE CASE issue in Parliament ... Both home minister and chief minister responded after 48 hours .... (they can't do something by showing the seriousness but public is thinking in a way that 'WE CAN DO WHAT EVER'-). Great India have a record now at least one girl is getting raped in every 2 minute-[NDTV].

not just delhi, anywhere in the world u protest the so called democracy would thrash you ,if not erase you!

shame on these so called "Protectors".

feelnig too sad.. its time to change d mentality...

There's no time to time to rest friends! We should change this hurt into anger and work towards getting the system changed once and for all!! Hats off to DELHI PROTESTERS who are braving the storm right now! Jai Hind!

all these ministers and police should be hanged first.......they r the root of these problems..

this is a disgrace for the nation

f*** our govt.
how the police men can behave like that...
first suspend those police men....

why the govt is not accepting this new law...because...if they apply for common people ...it is also same for vip's and other celebrities....then they could not reject no....they r still lokking after themselves not the indian citizens....

Why such a fuss about protests?? Last time Delhi witnessed such a protest when the YOUTH FOR EQUALITY and Lokpal Movement happened. what happened then??
Its the same govt and the same place, nothing is going to change, after some days no 1 of us will care........... thats what we have become....

it was lokpal and curruption which will not go so easily...but now it is about the girls..and we have to make them understand....

Time 2 stand together n change the laws. Rapists must b hanged in public so that no one even dares 2 think abt doing such. Don't rest ur angers time 4 dynamic change.

Instead of punishing the perpetrators they are acting against protestors. What the hell govt. is doing

Bring in Mr Modi ... and he will screw up these a**holes...! Its high time India had leaders with a SPINE!!!

i just wish sheila dixit has a daughter who falls victim to such thing once...then perhaps we wouldn't have to read,write or show protests...one phone call,n you'll hv heads floating in the yamuna..god bless this country that was intended for the people,but ultimately nothing's left to it....

If any body know cartoon video making, Please make cartoon video on Police and politians. The cartoon should be in such a way that they should feel shame to send their daughter or wife outside home. Very shameful.......

what u want from this govt.which is run by a puppet. the leaders of these are also the crupted. wt they can do?
don't expect any thing from our govt.by the defn of democracy, all power is in hand of de people. make de rule and hit the crime.

angreji ka ek kahawat h "if u want to see the change in the society take the things in ur own hand."

this is the police of our india.... every time they say we fight for public...... now by seeing this who say they fight for us or they fight against us.

You might be seeing it for first time,but it is a day today matter here in kashmir

Very true Imtiyaz.. this formula of alienating people was first perfected in Kashmir by this Govt. and is now being practiced all over the country!

lets c how this govt. wins in the next elections.... show a middle finger when the come for asking votes.

this is definitely a good post. crime regarding rape has no mercy......execution by hanging is only solution....